The BBC on 9 December 2016 reported statements by Guy Verhofstadt, the European Parliament’s chief Brexit negotiator , that the Associate EU citizenship proposal would be fast-tracked and would be on the table as part of the Brexit negotiations between the EU and the UK (see BBC coverage).  However, some experts in Brussels have since  argued that the proposal is unlikely to progress as citizenship rights for citizens of a non-EU country would require Treaty change (see The Guardian coverage).

Charles Goerens, MEP for the Alliance of Liberals and Democrats Group in the European Parliament,  has tabled an amendment to a Parliament report on the future institutional set up of the European Union, calling for the establishment of a European associate citizenship for those who feel and wish to be part of the European project, but are nationals of a former member state.  See Charles Goerens’ blog  here and his twitter feed with updates. 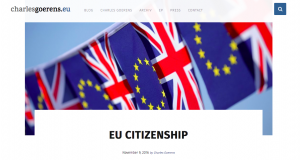