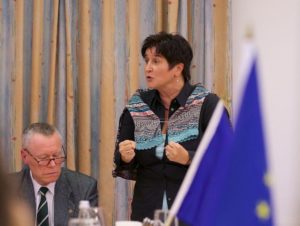 Summary (Scroll down below photos for full report):
Bavarian MEP Maria Noichl (SPD) spoke to a packed audience of Brits (and Germans) in Munich on Thursday 11 January. All were eager to hear a report direct from a Member of the European Parliament at this critical juncture in the negotiations. MEPs have both a voice and a vote in stage 2. Maria did not disappoint. In a friendly but forthright Bavarian style, she made it plain that the MEPs regret yet respect the decision of the UK to leave, but that the UK´s departure would not be allowed to threaten the integrity of the EU, nor to water down its four freedoms. She listened carefully to our concerns about the rights of UK citizens in the EU; she sympathised and assured us that the EP is indeed going to continue pushing to resolve the outstanding issues in our favour (continuing FoM for UKinEU, frontier workers etc.), as per the text of the EP Resolution of 13 December 2017: https://www.europarl.europa.eu/sides/getDoc.do?pubRef=-//EP//TEXT+TA+P8-TA-2017-0490+0+DOC+XML+V0//EN

The audience appreciated Maria´s willingness to engage with us and welcomed her acknowledgement that she and her fellow MEPs are indeed representing the interests of British people in Europe, many of whom have no voice or vote in elections and referendums in their own country.

The dialogue with MEPs will continue. 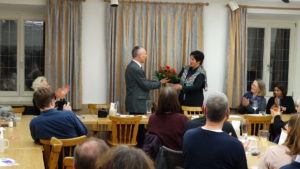 British in Bavaria 11.01.2018
Brexit negotiations, content and stage, from the viewpoint of the European Parliament (EP) With Maria Noichl, SPD, MdEP

Principal points of Maria’s talk: She is not directly involved on the committees charged with Brexit. She sits on the committees for agriculture, womens’ rights, development and Africa/Caribbean. The effects of the UK’s departure however reach into the deliberations of these committees. The UK’s contributions in these fields has been significant and will be missed. British MEPs urged their colleagues in the EP not to get involved in the referendum procedure in 2016, for fear of being seen as meddling. The EP recognises that a decision has been taken by the UK to leave the EU and will not undertake anything to change this. However, the feeling in the EP is that a hard line must be taken and maintained in relation to the UK’s withdrawal. There can be no half measures. Completely in or completely out – wer draußen ist, ist drauß’. The four freedoms of the internal market will not be deviated from. The EU is strongly wary of the UK. The EP is resolute, to go the hard way. There will no blackmail and no hostage taking. Gibraltar has not yet even been spoken about. The EP’s resolution of 13th. December 2017, on the position reached in the first stage of withdrawal negotiations, was approved by 550 yes votes, 62 no votes and 68 abstentions. The rights of all citizens are at the very top of the list, but it is unavoidable that this will involve some diminution, i.e some sacrifices and/or collateral damage. A transition period, if agreed, will involve full payment and no vote. Nobody however wants to see the UK done down. It is to be borne in mind that the trade agreement with Canada, possibly favoured now as Canada ++, took seven years to negotiate. There will need to be progress reports. On the day of withdrawal, the UK will be a third state for the EU. EP will remain clear and firm. The EP has no formal role in the negotiations themselves. The result of those negotiations will comprise one packet, to be put before the EP for either approval or rejection. The EP cannot make changes to the packet. What might happen after a possible rejection is not clear. Agreements for the EU are reached in total as a whole, there are no piecemeal provisions. This is how the EU functions. As to the current stage in the negotiations, the bones are there, but there is no meat on them. Citizens’ rights must not be used as extortion. Reciprocity also is not static. Should the UK in future make an alteration to the position reached in the Withdrawal Agreement, then it would have to reckon with a response from the EU.

From the discussion thereafter, in no particular order: The disenfranchisement of British citizens in the EU after Brexit is unjust and the anger that the exclusion from voting generates is understandable, but not something the she can do anything about; She did accept that British citizens in Bavaria are her constituents; There is constant provocation of the EU from Farage & co. The flag waving is in common only with French Front National. She will follow up on freedom of movement for Brits in EU27 after departure, as well as the idea of a form of european citizenship. Love is not always for ever – the EU will need better and clearer procedures in future to regulate how a member state can leave, or be required to leave.