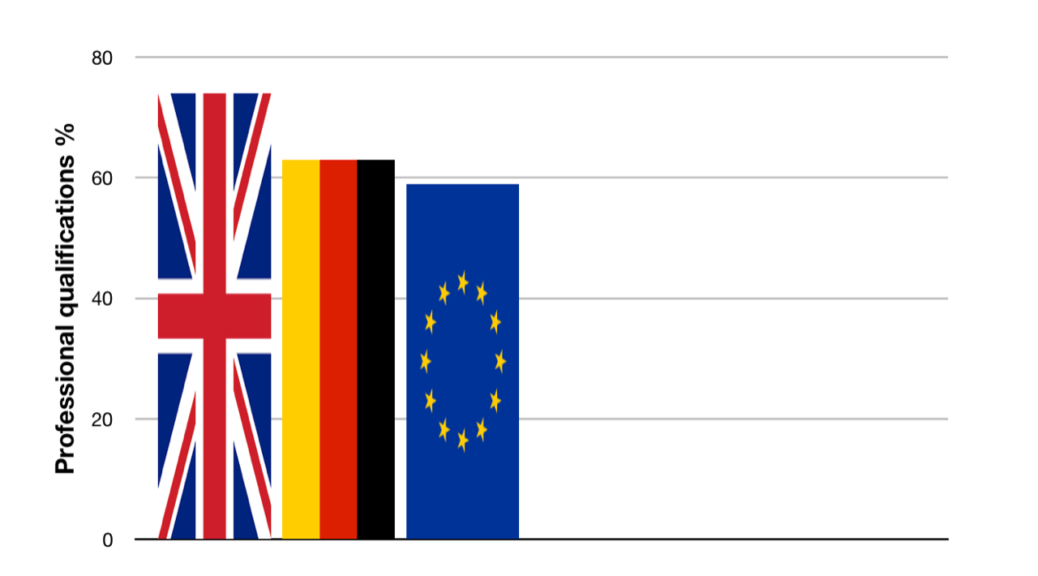 In 2016  the German Statistical Office recorded around  107,000 registered Brits living in Germany. Since June 2016, that figure has risen sharply.

A 2016 micro-census  by the German Statistical Office revealed that 74% of British migrants in Germany have a professional qualification. This makes them some of the most sought-after

workers in Germany: only Austrian migrants had higher levels of qualifications (77%). Only 59% of other migrants from Europe, and 63% of the general population, were similarly qualified.

This is reflected in British workers’ high average earnings (and, by extension,  tax contributions): according to 2016 Statistical  Office figures, the average British

worker in Germany had a take-home salary of €2820 per month. This compared to a national average of €1958. In fact, British workers had, by a  significant margin, the highest average income for workers all national backgrounds in Germany. Households with at least one British member also had an above-average monthly net household income of 3899 euros, or 1962 euros per capita.

Brits in Germany are playing an important role in plugging Germany’s shortage of skilled workers: a 2017 report by the Cologne Institute for Economic Research found employers were struggling to fill two in three job openings for qualified positions. Just over half of businesses reported that this negatively affected their productivity, innovation and capacity for growth. Attracting and retaining suitably qualified migrants, the report concluded, will be increasingly crucial to ensuring Germany’s ongoing international competitiveness into the future.

Germany could, in fact, be set to benefit even further from British workers in the post-Brexit climate: an international survey by online employment website StepStone found Germany was the stand-out favourite prospective destination for 600,000  highly-skilled British workers and experts who are actively planning to emigrate to another EU country. 44% saw it as their first choice, meaning that 264,000 specialists are considering a move to Germany. “Brexit thus has the potential to alleviate Germany’s skilled worker shortage,” commented Dr. Sebastian Dettmers, managing director of StepStone.de.

The overwhelming majority of Brits in Germany are of working age. Data from foreign registrations reveals that

only 16% of Brits were aged over 65. This is in line with British in Europe estimates for British across the EU. Contrary to common misconceptions, only a minority of Brits living abroad are pensioners.

The average age for British citizens in Germany was  46.6,  according to the same data source.

Registration office records also show that the average British citizen has been living in Germany for 20.3 years. Around 15% are married to a German, with many more undocumented partnerships.

Micro-census data records Brits as working across a wide range of economic sectors. British in Germany members  have the most diverse careers imaginable, from documentary film makers and journalists to lawyers to kindergarten educators. See here for more case studies of Brits in Germany and across the EU.

The British presence in Germany is not only felt through migration: recent figures from the Statistical Office show that Britain is one of Germany’s most important trade partners. In 2016, 121.6 billion euros of goods were traded between the two countries. Only China, France, the USA and the Netherlands were of greater significance. Germany exported much more to the UK (€86.1bn) than it imported (€35.6bn).

Click here for further statistics on British citizens in the EU from our coalition umbrella body, British in Europe.