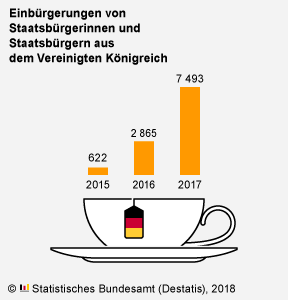 The official, Germany-wide figures on naturalisation (Einbürgerung) in 2017 have been published today. You can find the German-language press release from the Federal Statistical office here.

In 2017, the overall number of applications for German citizenship was up 1.7%. Here’s a summary of the key data:

Interestingly, around 9% of all Brits who became German citizens in 2017 applied from outside Germany. Most of them will be older people who lost their German citizenship during the Nazi period, and their descendants.

What’s more, while the Federal Office for Migration and Refugees uses 10 years registration in Germany as a base for calculating those eligible, in fact 8 years’ residence is standard, so the number for those eligible may in fact be even higher.

While Brits who’ve been granted German citizenship before the end of March 2019 can retain their British citizenship, and therefore have dual nationality, those whose German citizenship applications are not granted until after Brexit will face a choice between being British or German, but won’t be able to retain both.