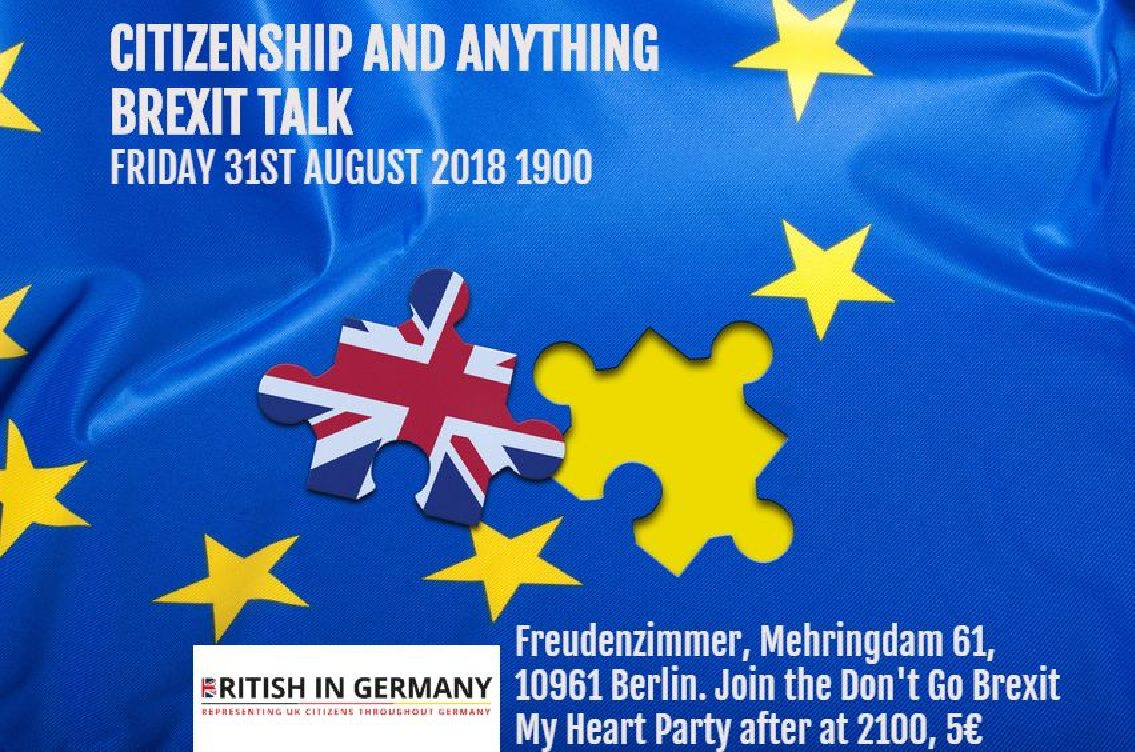 Hi, I’m Adam Takar,  just arrived into Berlin to be one of the BiG interns for the next 6 months or so.  I’m a French and German student at Oxford Uni in my third year abroad. The party happened on my second day in Berlin, so that was a great way to get to feel for what I’m in for.   And it didn’t disappoint!

On Friday 31st August, British in Germany hosted a public Infoabend and Party at Freudenzimmer in Mehringdamm, Berlin. The Infoabend consisted of a panel of five speakers, chaired by BiG’s own Daniel Tetlow. Speaking were Andrew Connell (First Secretary EU at the British Embassy in Berlin), Professor Gerhard Dannemann (Professor of English Law, British Economics and Politics at the Humboldt-Universität), Jane Golding (Chair of British in Germany and British in Europe), Dr. Nicolai von Ondarza (Head of EU/Europa Research Division at the German Institute for International and Security Affairs), and Derek Scally (Irish Times Berlin Correspondent). Chatham House rules were requested for the meet, so that people could speak more bluntly and informally., but that obviously means I’m somewhat limited in what I can report.

The evening began with host Daniel Tetlow telling us that Berlin was growing fast in its Brit population with over 28,000 Brits now registered as of December 2017 compared to around 16,000 only 2 years previous. That means Berlin has topped  North Rhein Westfalia that used to be the German state with the largest number of residing Brits.  Certainly it’s very evident when walking the streets of Berlin the number of British voices one hears.   Daniel then led a discussion with the speakers and audience that raised the current state of affairs regarding the Brexit negotiations and the current possible scenarios that may play out over the coming months up to March 2019.  Mr. Scally provided particularly interesting insights regarding the Irish border situation.

Certain members of the audience were asking for British citizens in Berlin, Germany and Europe as a whole to have greater visibility in the media which may help protect their rights, with the main issues of the night focusing on problems with residency registration, bureaucracy and citizenship.

I personally was not aware of the extent to which British citizens in Germany, and more broadly in Europe, felt left behind by both the UK government and people.  It was clear that at times the audience became frustrated with Mr. Connell from the British Embassy regarding issues of residency registration, citizenship and possible withdrawal deals. Being a representative of the British Embassy, Mr. Connell’s hands were tied and he could only say so much. He assured the audience that the government was working with their interests at heart, yet some audience members clearly felt that this assurance was not enough.

There was a strong sentiment that even with British in Germany’s efforts, more needed to be done by people on both sides of the channel, as well as media and the government to help give British citizens in Germany some hope or relief so that they could continue their lives as normal. It was a great experience for me to see so many Brits in Berlin standing up for their rights, willing to have their voices heard.

The Infoabend was an open discussion, and many questions were asked regarding the current woes and anxieties of existing British citizens living in the EU, most of which Jane Golding said were absolutely justified and that she would continue to make their case with the ongoing contact she has with the negotiators. The event was very successful with all speakers staying on for the party afterwards and speaking one to one with audience members.

The Party provided a friendly and more upbeat atmosphere where we could meet, talk, and get to know each other. Well-known British throwbacks were played, danced to, and reminisced over allowing for a nice alleviation of the tenser frustrations in the talk earlier.

Overall, the evening a very strong and positive experience for me and very successful based on the number of people that publicly complimented the work of British in Germany, many expressing thanks to the group before they asked their question.   Mr. Connell, representing the British Government, assured us that he would take our concerns forward to the British Government. We will see what the impact of that, if any, will be.   I was personally witness to many new guests signing up for the BiG mailing list and membership.

I am looking forward to my time working with BiG in the coming months and to hosting more evenings such as this one in Berlin.  We will soon publish a list of upcoming Infoabends that British in Germany will be holding with the British Embassy across the country up to March 2019.