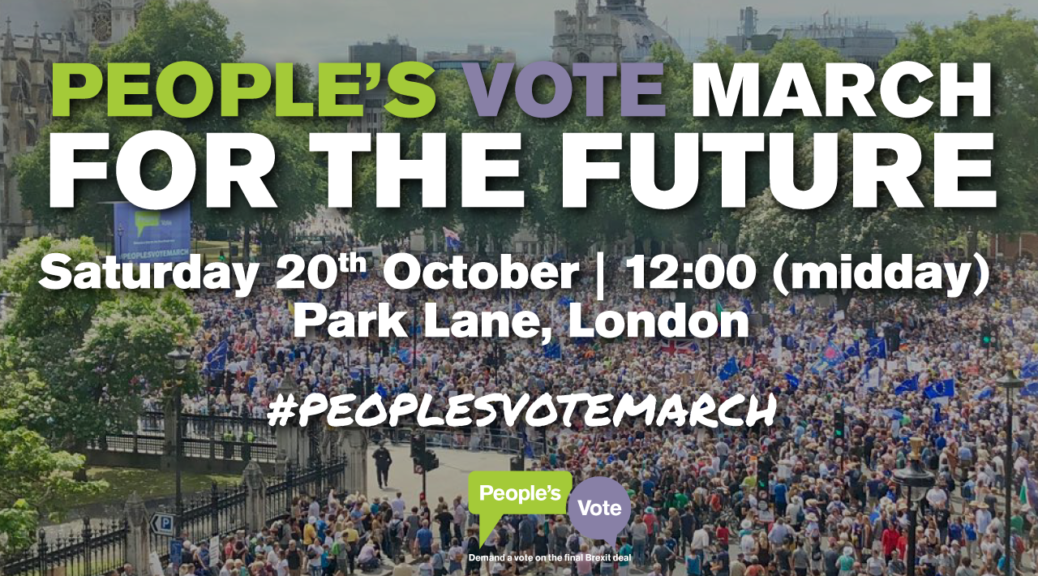 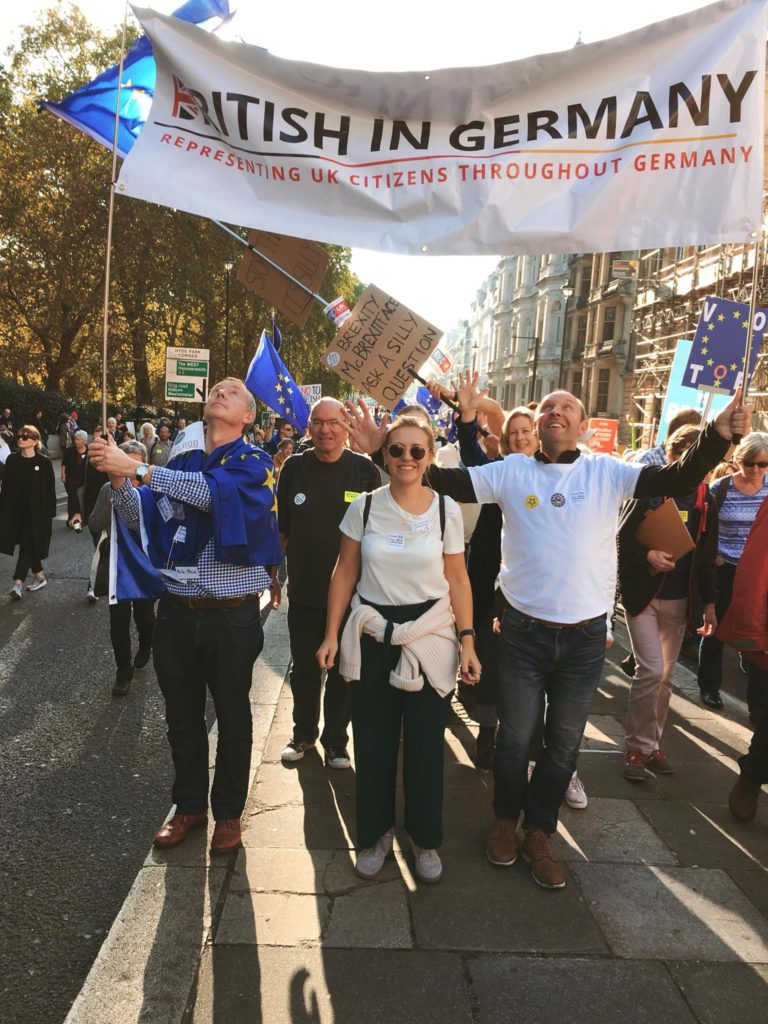 Ellie Sellwood reports on the London March which took place on 20th October.

Sunshine, Solidarity and Strength: British in Germany at the People’s Vote March for the Future 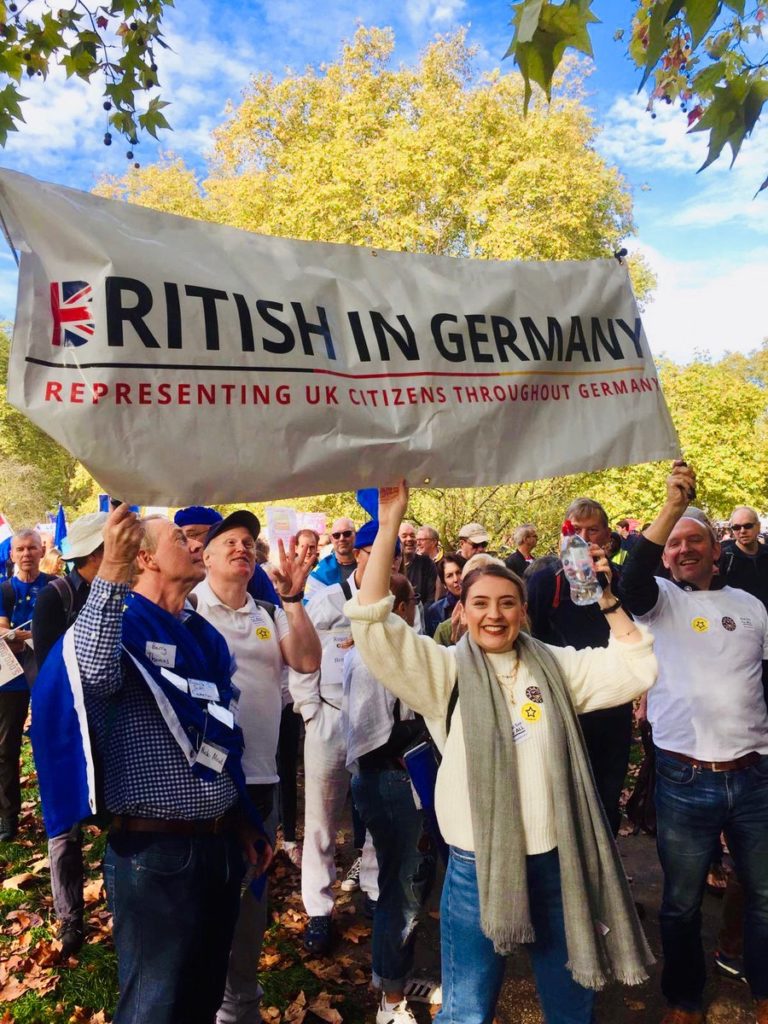 The group of around 400 people all gathered in the sunshine on the field under their banners, in blue berets with yellow stars on, and waving their placards, some dressed in white, others in blue. For some, it was the very first time they had met each other, as so many of these citizens’ rights groups have members from all across Europe and it was like a big meeting of old friends.

At the front stood members of the British in Europe Steering Committee, including Jane Golding founder of British in Germany and spokeswoman for British in Europe, and members from the3million. First to address the crowd was Axel Antoni, spokesperson for the3million who spoke about the fact that EU citizens hadn’t had the chance to vote in the referendum and have been some of the worst affected by the negotiations. By the end of his speech he had the crowd chanting ‘We’re the 5 million.’ Then came Kalba Meadows, founder of Remain in France Together and member of British in Europe’s steering committee, who had organized the gathering for the Brits from across Europe. And then it was the turn of Debbie and Molly Williams and Elena Remigi of the In Limbo project who spoke about the plight of the contributors to the In Limbo books. Amidst shouts of ‘We are the 5 Million’ in a number of different languages, a few tears were shed and the groups all started to set off singing and chanting towards the start of the march. 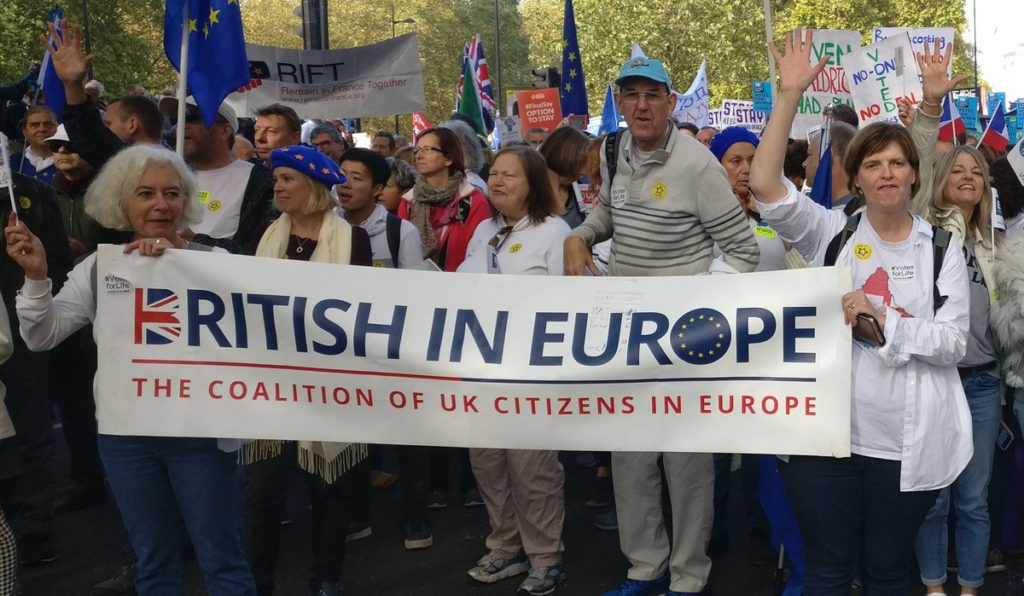 Once the group had walked a short way, it became clear, as more and more people spilled out of the coaches, that a huge number of people had shown up to take part. This became even clearer when British in Germany, British in Europe, the3million, British in Italy and the Brexpats groups found themselves stuck at a standstill for two hours before the march got underway.

Whilst the marchers were waiting, there was singing, clapping, dancing and, of course, chanting which meant that everyone was in a party mood. There were new parents carrying their babies with placards like ‘I missed my first birthday to march for my future,’ pensioners shouting ‘Bollocks to Brexit,’ young people waving European or rainbow flags with placards stating that the UK government was taking their rights away and people of every age, gender, creed and colour imaginable. It truly was a fantastic turn-out and a real joy to be a part of. 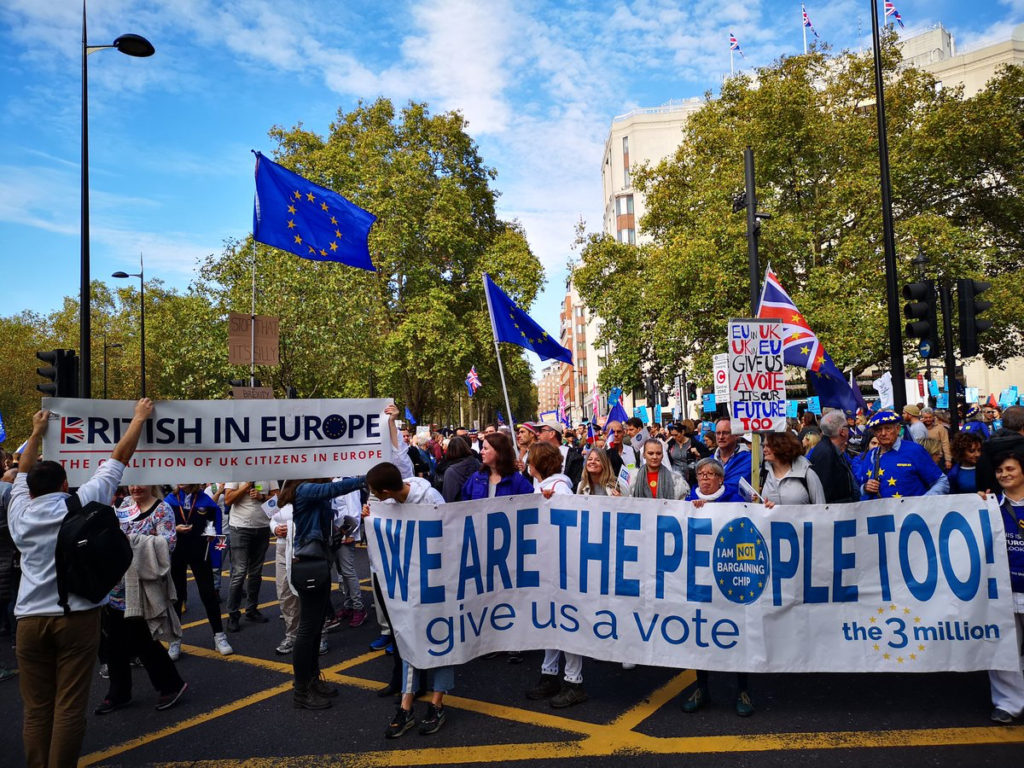 Once the march got underway, there was music and the Ode to Joy was played almost non-stop, be it by bagpipes or a boombox. It was then that rumours started to spread like wildfire through the crowd, someone said that the marchers totaled half a million, another said 600,000. Whatever the truth, learning that the number could be that high really added to the excitement.

The British in Germany group didn’t make it to the speeches by Parliament because of the sheer numbers of people, but it was an honour to be there and to march for so many of us across Germany who are living in limbo. One thing’s for sure… the tide is turning on Brexit and we were so happy to have been a part of making this happen.