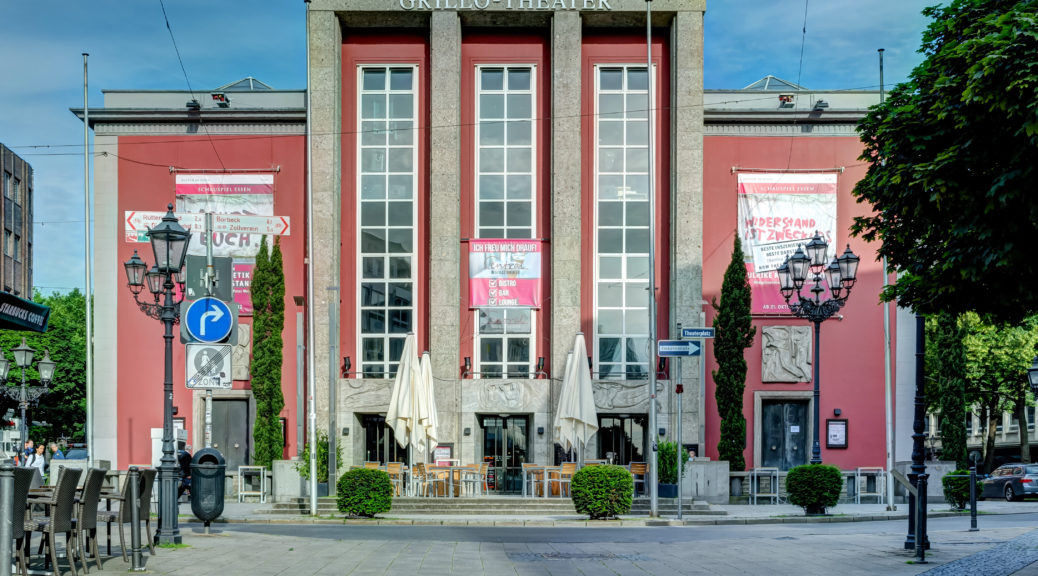 Constance Simms, one of the British in Germany Interns, reports on the recent InfoAbend in Essen.

The InfoAbend in Essen took place on the 31st of October in the Volkshochschule, Burgplatz Essen, with BiG representative Jenny Hayhurst joining Rafe Courage (British Consul General Düsseldorf), Bernhard Nadorf (Chair of the Deutsch- Englische-Gesellschaft Ruhr e.V.) and Frau Anjelika Fischer (there as a representative of the town of Essen) for a discussion on the current state of negotiations, followed by a lengthy Q&A session.

Making my way to the venue through the streets of Essen, I was confronted by many a horrific apparition due to the meeting falling on Halloween Eve. Witches, ghosts and a splattering of fake blood greeted me as I hurried along, however the scariest spectre of the evening was yet to be encountered, that of a No Deal Brexit.

It was this fear of a No Deal scenario, due to our proximity to the withdrawal date, that permeated the atmosphere of the evening. 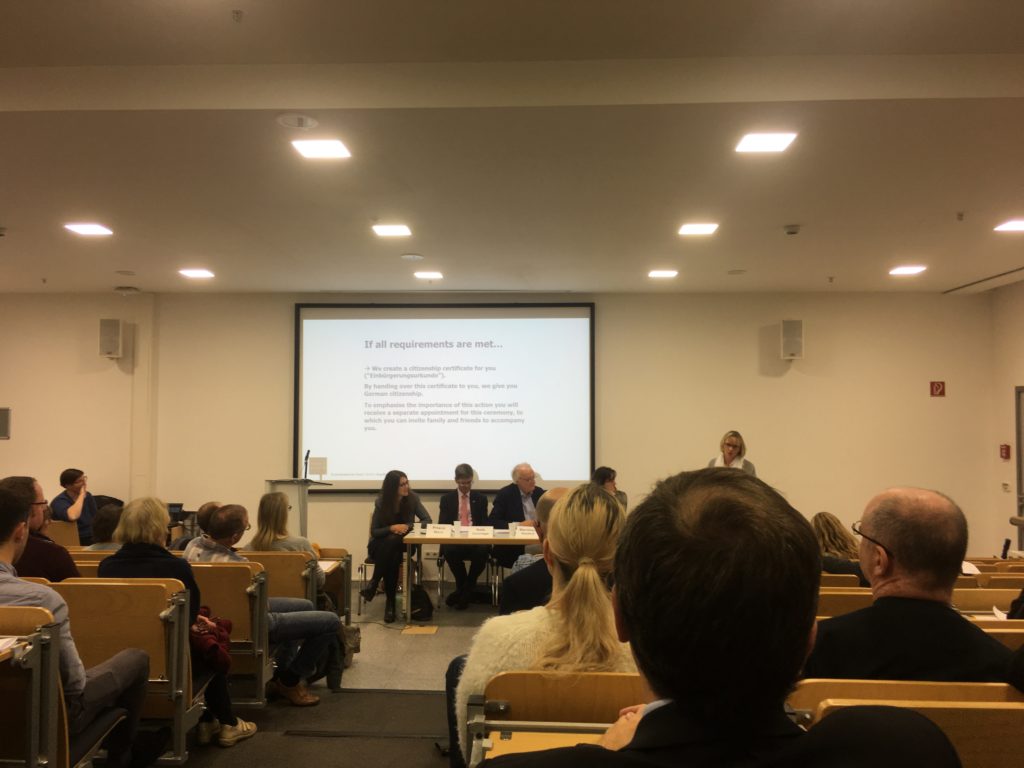 Following an opening statement by Bernhard Nadorf, wherein all the speakers were introduced, Mr Courage took to the floor. He underlined the futility of a No Deal scenario for everyone involved, emphasising that his colleagues were working hard to ensure a deal so that an agreement would be reached to permit EU citizens in the UK, and UK citizens in the EU to continue living their lives more or less as they hitherto have been.

Mr Courage was followed by BiG’s Jenny Hayhurst, who opened with a challenge to the commonly held image of British citizens in Europe, reminding the panel and audience that of the 1.2 million British citizens in the EU, over 84% are under 65 and thus of working age. In a further sting, she reiterated how 60% of these British citizens were disenfranchised in the referendum, a referendum that has tossed many of their lives into an agonising state of limbo. Ms Hayhurst stressed that although in practical terms it was a sensible idea for British citizens living in Germany to collect as comprehensive a stack of documents as possible in order to prove their status should Britain crash out of the EU, the best solution is to make sure that Citizens Rights (as laid out in the Withdrawal Agreement) are ring fenced, in order to restore a semblance of stability to the 1.2 million British lives on the continent. 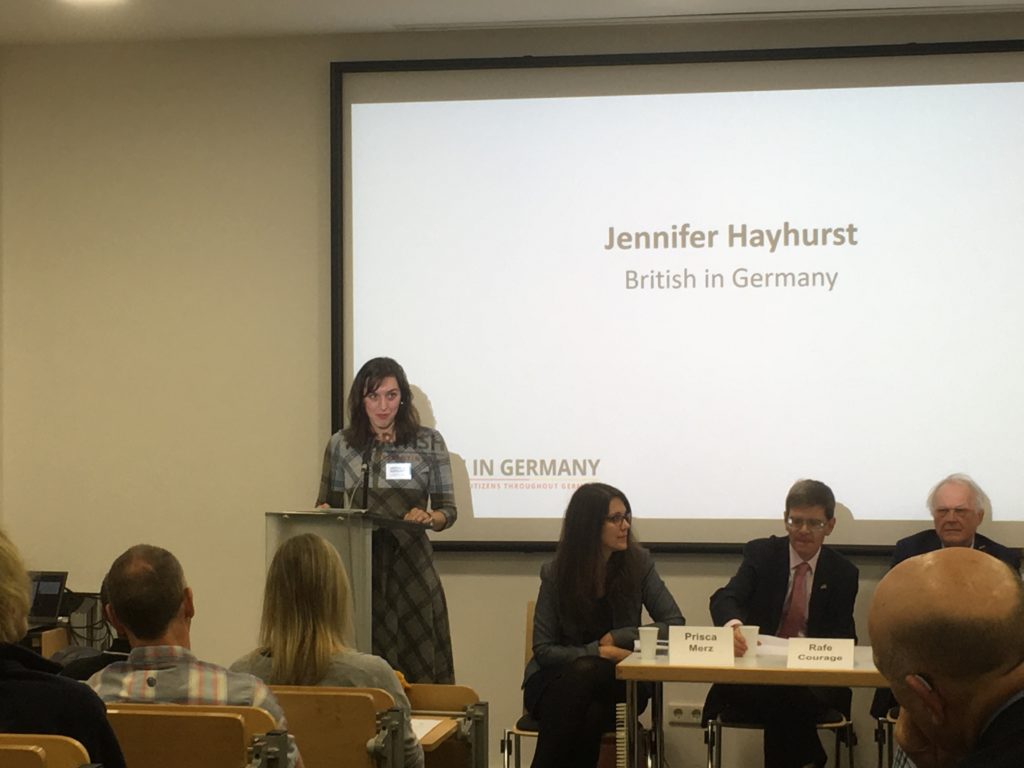 Frau Anjelika Fischer addressed the crowd next with her practical approach to taking German citizenship, accompanied by an informative slideshow that explained why to do this, who is eligible, and how to go about being naturalised.

The subsequent Q&A was under Chatham House rules, so I am somewhat limited in what I can report regarding the questions or the panel’s answers. I am, however, able to disclose that a lot of questions concentrated on the subject of British citizens returning to Britain with their European spouses in the event of No Deal. Further questions revealed that pensions, cross border payments and travel restrictions were also a top priority, along with the question of German citizenship (for which Frau Fischer’s presence was indispensable).

The questions revealed a sense of growing distrust among British citizens in Germany towards the British authorities, and a strong frustration about the lack of information available when we are so close to the Brexit date of the end of March 2019. Many felt that the lack of provision made by the British Government has left them in a state of great uncertainty. BiG’s Jenny Hayhurst was especially tactful in addressing this issue in her speech, pressing the panel’s British Government representatives for more answers to the many vital, unanswered questions. BiG are making a formal record of all the questions asked and the answers given, in order to pursue answers from the British authorities in the forthcoming months.

The BiG’s InfoAbends are continuing around the country, with the next one taking place on the 13th of November in Bremen. More information is on our website and our facebook page.