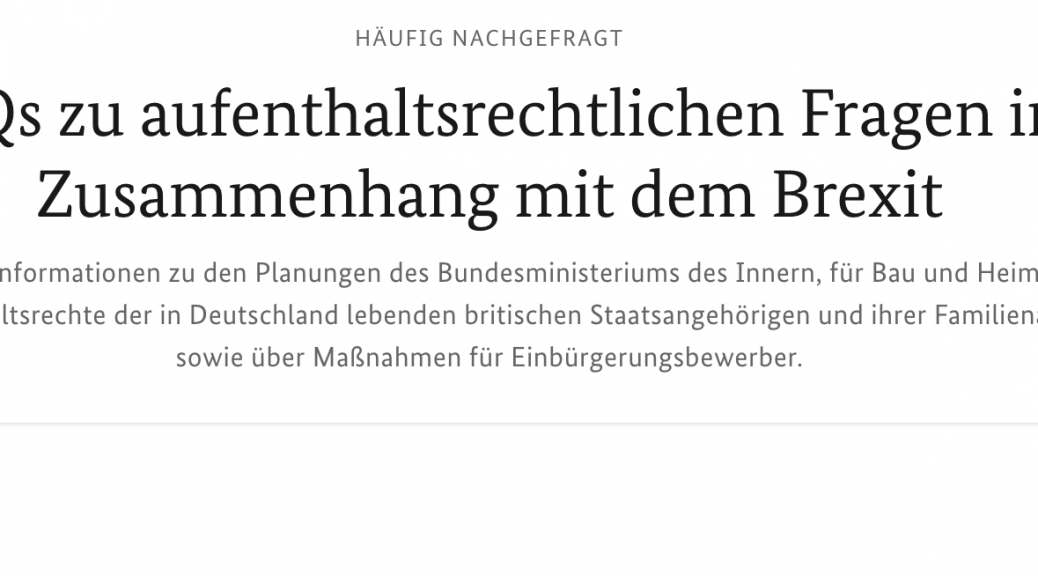 The Federal Ministry of the Interior, Building and Community (BMI) posted an FAQ on its website just before Christmas about Germany’s plans regarding the residence rights of British citizens in Germany after Brexit. The FAQ covers both deal and no deal scenarios.

The BMI explains that, until 29 March 2019, British citizens remain EU citizens with rights of free movement, but of course are still subject to the obligation to register with the relevant administration where they reside.

In the case of a deal, there will be a transition phase until December 2020 during which the rights of British citizens in Germany will stay the same as they are now. Any British citizen who arrives in Germany before that date will be covered by the Withdrawal Agreement and will be able to apply for a status under that agreement in Germany, which will secure (most of) their rights in Germany going forward. To this end, some federal immigration authorities (Ausländerbehörde) are already planning a voluntary registration system before the UK’s withdrawal.

The BMI also gives more details of what is planned in the case of a no deal. In this case, Germany is planning a three-month transition phase from 29 March 2019, which could be extended, during which time British citizens and their family members can, without a residence permit, live and work in Germany as before. However, after this, British citizens will need such a permit, since after Brexit, they will no longer be EU citizens but third country nationals. They are advised to apply for this before the end of the three-month transition phase (the BMI then links to the Federal Office for Migration and Refugees (BAMF) information on residence in Germany), and their rights to live and work in Germany remain the same until a decision is taken on their application. As noted above, some Ausländerbehörde are already planning a voluntary registration system to this end.

How different categories of British citizens will be affected

The BMI then explains how different British citizens will be affected by the two scenarios:

British citizens who also have another EU citizenship will not need a residence permit.

British citizens who have German citizenship will obviously not need a residence permit but may obtain additional rights under certain conditions under the Withdrawal Agreement.

British citizens who are family members of an EU citizen of another EU country are expected to keep their free movement rights but are asked to register with the relevant Ausländerbehörde where that (voluntary) registration is already envisaged (see above).

British citizens without another EU citizenship will need a residence permit and should make sure that they are registered properly where they live and are asked to register with the relevant Ausländerbehörde where that (voluntary) registration is already envisaged (see above).

The FAQ sets out some first useful information but by no means answers all the detailed questions you may have about your future status. These issues include: how each Land proposes to implement these measures; in the case of no deal, the position of people who already have a permanent residence document but do not have German citizenship, or those with less than five years’ residence in Germany; and details of which status to apply for in the case of no deal, as well as how to apply for the status in the case of a deal, and so on. The British in Germany team will be seeking clarification on these and other questions raised by these proposals and have requested meetings with both the Auswärtiges Amt, along with representatives from other ministries such as the BMI, and with the office of the Minister of Foreign Affairs, Heiko Maas, early in the New Year. We have also collated the types of questions raised by our members on social media so that these can also help inform our discussions with the German authorities in the New Year, and will be putting out a call for case studies shortly as well. In short, we are following up to confirm how the government’s proposals will apply to all British citizens, as well as their family members, currently resident in Germany, whatever their circumstances.

More information on this website as soon as we have it.

You can read the original FAQs in German.

You can also read The Guardian‘s 22 December article on residency for Brits in Berlin.