The independent website is carrying a story that German Chancellor Angela Merkel has blocked Theresa May’s proposal to guarantee EU citizens rights before Brexit negotiations begin in earnest next year. The story originally appeared on the Politico website and was apparently discussed during the two leaders meeting at the recent NATO summit.

It’s not entirely surprising, as Merkel has made it clear that there should be no negotiations before the UK finally declares its hand and submits its request to leave the European Union according to Article 50. The German government is frustrated that the UK has not clarified its thoughts on how it sees the future relationship with its major trading partners on the continent. Merkel rejected the proposal to cement “acquired rights” at this early stage – she’s probably worried that part of the UK’s negotiating tactics is to make as many side deals as possible in advance of the formal discussion.

Of course, for both UK citizens in other European countries and for EU citizens in the UK, it’s unsatisfactory. It would be have been useful to resolve their status at this early stage. It would remove, however, one negotiation card in the current Great Game being played out between London and Brussels.

Brits in Europe will submit written evidence to the Exiting the European Union Commons Select Committee that will include a position paper looking at the main issues for economically active British citizens living in the EU.   For further details contact us here.

UPDATE: The High Court Judgment on the Article 50 challenge was handed down at 10am, 3rd November 2016 in Court Room 4.  The Government lost the case and appealed.  The appeal went direct to the Supreme Court and was heard between 5-8 December with judgment likely in January. All 11 Supreme Court judges heard the appeal.

Judgment on the Article 50 challenge will be handed down at 10am, 3rd November 2016 in Court Room 4. An appeal by the losing party or parties, ‘leapfrogged’ direct to the Supreme Court to be heard early in December, is very likely.

The Peoples Challenge have said they will be launching a new fundraising appeal tomorrow to cover legal costs and other expenses associated with the appeal.

I was an ex-pat for 9 years including 7 working in Benelux, and have spent most of my career working in international teams.  I welcome our valued EU friends in the UK,  and  I agree with your approach. My slogan is:

We Lost the Vote, but We Can Still Win the Terms

Now in the months up to March 2017,  strong political pressure on specific, factual issues from the general public and interest groups such as British ex-pats is vital: to stir up public indignation at the loss of their rights & to give backbone to the “weak Remainer” majority of Conservative MP’s to limit the damage of Brexit, so forcing the UK Govt. to preserve as many current benefits of EU membership as possible in their negotiation terms.

As well as direct lobbying, one way this pressure can be focussed is by promoting UK Parliamentary Petitions that aim to protect UK ex-pats, EU expats in UK, Freedom of Movement and the Single Market in general. Any UK citizen anywhere, and any UK resident of any nationality, without age limits, can sign these. At 10,000 signatures, the Govt. must answer. At 100, 000 signatures, Parliament must debate the issue.

I recommend several UK Parliamentary Petitions, the first deriving from my question during the campaign “Why are the Brexiteers so willing to sign away the rights of the British people ?”:

2nd, to include protecting our valued friends the EU citizens who are ex-pats in the UK:

Then on specific ex-pat issues:

The public should be asking: which MP’s will sign away our rights ? 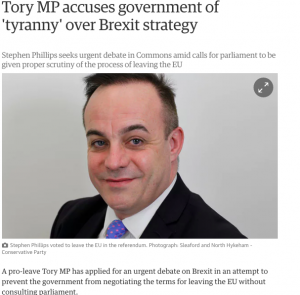