In a set of two articles the UK Ambassador Sir Sebastian Wood and the head of the German government’s Brexit Task Force Axel Dittmann talk citizens’ rights, travelling after Brexit and no-deal preparations. Jane Golding, BiG and BiE were praised for their work protecting Citizens’ Rights.

Dittmann said: “I absolutely agree with Jane Golding and Maike Bohn, who represent British in Europe and the3Million in regular meetings here in the Foreign Ministry, that citizen’s rights are of the utmost importance. This topic has been and will remain our top priority.”

(DE)  Robert Harrison is interviewed on Kontrovers about the concerns of British Nationals in Germany (starting at 08:53), BR, 20 March, 2019

Jenny Hayhurst is interviewed on about the concerns of British Nationals in Germany, Deutsch Welle, 21 March, 2019

Matt Bristow together with Jonny and Kirsty were interviewed by BBC Scotland’s flagship news programme, “The Nine“, BBC Scotland, 12 March, 2019

Jane Golding is quoted in a report in an article ‘No quick fix for citizen rights under no-deal Brexit, says EU official‘, The Guardian, 6 February, 2019

(DE + english with german subtitles) Gary Blackburn, a BiG member, was interviewed on the impact of Brexit in the SAT1 evening news for the Rheinland Pfalz/Hessen region. Click on the image below for the video, the report starts at 2:35 mins into the broadcast. 2 February, 2019. 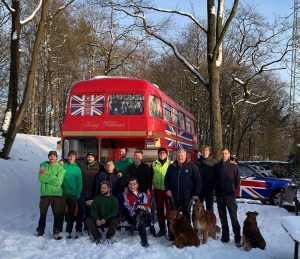 (DE with english subtitles)  Attendees to the Hamburg InfoAbend and Stammtisch  were interviewed for ARD’s Tagestheme programme, 28th January 2019

(DE)  Daniel Tetlow features in an article by Bernadette Mittermeier regarding the concerns of EU and UK nationals in the post-Brexit world “Wir sind alle verunsichert”, Süddeutsche Zeitung, 21st January, 2019

(DE)  Ingrid Taylor was interviewed on the BR about the impact of the failed vote on the Withdrawal Agreement in the House of Commons, ‘Ingrid Taylor, Verein “British in Bavaria“‘, BR-Podcast, 16th January, 2019

Daniel Tetlow was interviewed on the situation for UK Nationals living in another EU Member state on Deutsche Welle, 16th January, 2019

Jane Golding was interviewed on the situation in the UK following Parliament’s rejection of the Withdrawal Bill  on Deutsche Welle, 16th January, 2019

Daniel Tetlow was interviewed as part of an article on how “No-Deal” would affect UK nationals living in another EU Member State, ‘Brexit: How would no deal affect UK citizens in the EU?‘, BBC, 14 January, 2019

Matt Bristow of BiG was interviewed as part of an article on the situation of UK nationals now living in another EU Member state, ‘We are being abandoned’: Britons in EU on the Brexit deal vote,’ The Guardian,  13 January, 2019

Rachel Loxton, ‘What you need to know about Berlin’s Brexit registering process,’ The Local, 4 January 2019

Channel 4 News included interviews with Jane Golding and other BiG activists in Berlin. We were asked about the impact on our everyday lives and what a no-deal Brexit means to us. You can watch the interviews here, Channel 4 News, 18 December 2018

Brexit planning: what you need to know about Germany’s plans for a no-deal, The Local, 17 December 2018

Laura Shields of British in Europe is interviewed by Simon Bolton of Sky News following the adoptions of the Withdrawal Agreement, 27 November 2018

(DE) British in Bavaria’s Stammtisch was reported on in the Süddeutsche Zeitung in an article on the impact of Brexit on British Citizens living in Munich. 27 November 2018

Emma Corris, UK citizens’ rights and Brexit: What now?, The Leipzig Glocal, 11 May 2018

Catriona Harvey-Jenner, This is when EU citizens will lose their rights to freely live and work in the UK thanks to Brexit, Cosmopolitan, 1 August 2017

Lisa O’Carroll, The Brexit trap that’s closing on Britons who live in Europe, The Guardian, 11 May 2017