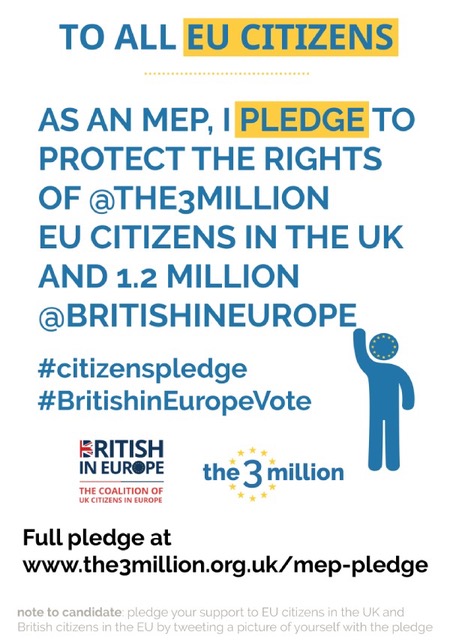 British in Germany urges everyone to use their right to vote in the European Parliament elections on 23-26 May. Together with British in Europe and the3million, we encourage you to contact MEP candidates in your region (whether in the UK or other EU country) and ask them to sign the pledge to keep citizens’ rights on the agenda and guarantee our rights fully in the next European Parliament. If you are meeting any candidates at hustings or other European election events, please ask them to sign the pledge!

If you have decided to vote in the UK:

Click here to write to your existing UK MEP https://www.writetothem.com

As a candidate for the European Parliament elections 2019:

Ask your MEP candidate to tweet a photo of themselves with a printout of the pledge below to @the3million, @britishineurope and @britishingermany

For further detail on how to secure rights by the October deadline, see https://bit.ly/t3m_BiE_April2019.

British in Germany does not endorse individual candidates or any political parties.

Please take a picture of yourself with the pledge on a tablet or on paper and tweet it.

We suggest you use the wording below:

If you want to check out who has signed so far, you can visit the Signatories page.